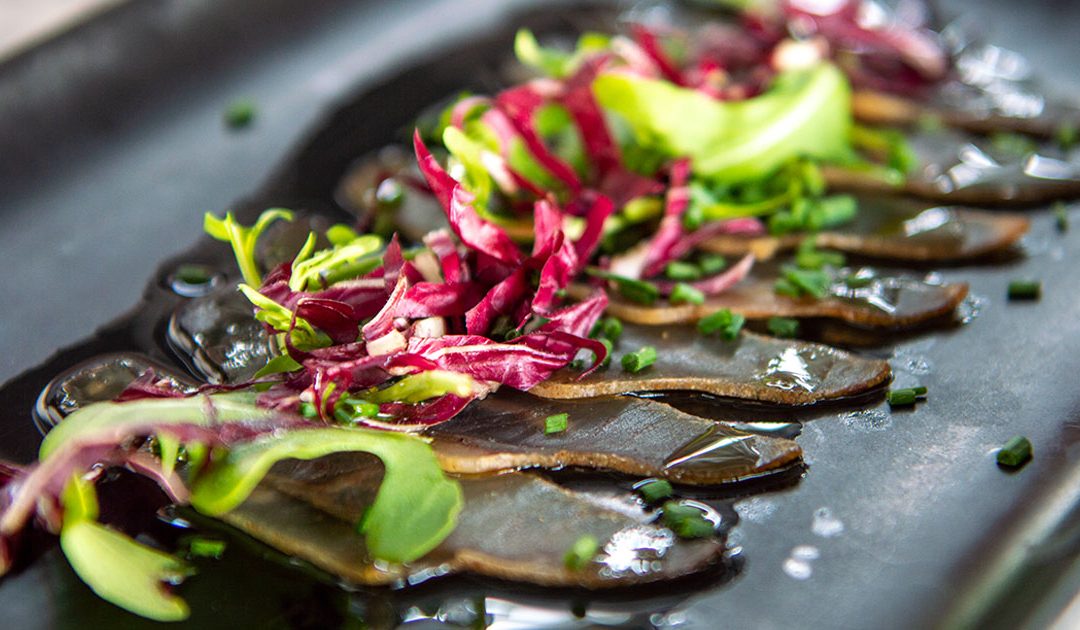 AS SEEN ON AUSTRALIAN MASTERCHEF!

While dry-aged fish is popular worldwide, the process has only recently reached our shores.

South Africans, raised on dried meat like biltong and droewors would be excused for assuming that dry-aged fish might resemble bokkoms (the dried fish delicacy from the West Coast). “This couldn’t be further from the truth,” says Kurt Hill of Cape Fish, the first company to offer the product in South Africa.

“Dry-aging does remove moisture from the fish but it still remains incredibly juicy and tender, with a mouth-watering flavour. You can’t compare it to fresh fish, and certainly not to bokkoms!” he says.

Kurt adds that removing moisture means that there is an intensification of flavour as the fats develop and the “bad” proteins break down, so it’s a cleaner cut of meat without the fishy smell that puts so many people off fish. “It’s so clean, it makes excellent sashimi and nigiri,” he says.

Dry-aging is an art rather than a science and can include curing and smoking, he explains. “There are no formulae – it requires patience and a controlled environment and can take anywhere from a few days to weeks. It depends on each individual fish.” A great advantage is that the process extends a fish’s prime period from a few days to 20 or more, maximising the time that we can use to ensure we utilise all of the fish.

It can then be prepared exactly as you would fresh fish (fried, steamed, braai-ed, in a seafood soup or stew…). Because there’s less moisture in the fish, it cooks more evenly – and over direct heat the outside will crisp to perfection. For those of you that like skin crispy, look no further.

Dry-aged fish also takes on other flavour profiles really well, so it’s very good seared as a steak or raw on a salad lightly drizzled with a simple lemon and mustard dressing. But Kurt prefers to pan-fry it simply with a knob of butter and a pinch of salt and pepper: “I think that’s the best way to appreciate the rich flavour that has developed through the meat as it ages.”

Kyle Nold & Kurt Hill started Cape Fish in April 2012, doing late night and early morning deliveries. “At that point, Cape Fish had a beaten-up bakkie and one tuna boat, but within months we were having to buy from other fishing vessels to keep up with sales,” he remembers.

Over the years that followed, Kyle and Kurt expanded into high-quality, super-frozen tuna to bridge the gaps when they were oversubscribed for fresh fish. Today, the company focuses on the supply of sustainably caught and sourced seafood, specialising in the handling of fresh large pelagics such as yellowfin tuna. The business owns a processing facility with onsite blast-freezing, a holding freezer, chiller, processing rooms and dry-ager machines. “Our factory floor is so clean you could eat our tuna off it,” Kurt says proudly.

Cape Fish supplies restaurants and the public with frozen, fresh and dry-aged seafood products from their premises in Paarden Eiland.

Salsify at the Roundhouse, The Pot Luck Club, Obi and Orca Cafe are some of the well-known Cape restaurants that have dry-aged fish on their menu. It is also sold over the counter as part of the Cape Fish Butcher Line, which includes intriguing products like swordfish bacon, marlin carpaccio and salmon sausages that have given pescatarians a new range of dishes to enjoy.

Consumers who make conscious buying decisions will also be pleased to hear that besides Cape Fish’s focus on sustainable fish species, dry-aging is an ethical manufacturing process. There’s no wastage and Cape Fish utilises the entire fish, says Kurt. “We use the prime cuts for sushi, sashimi and other Cape Fish Butcher Line products; the offcuts go into our fishcake mixture, the bones and skin to fish meal and the remainder, including fish heads, are used for bait. Nothing is wasted.”

ABOUT CAPE FISH
Based in Cape Town, Cape Fish is a local South African business bringing pristine quality and ethically sourced seafood products from South Africa and around the globe.