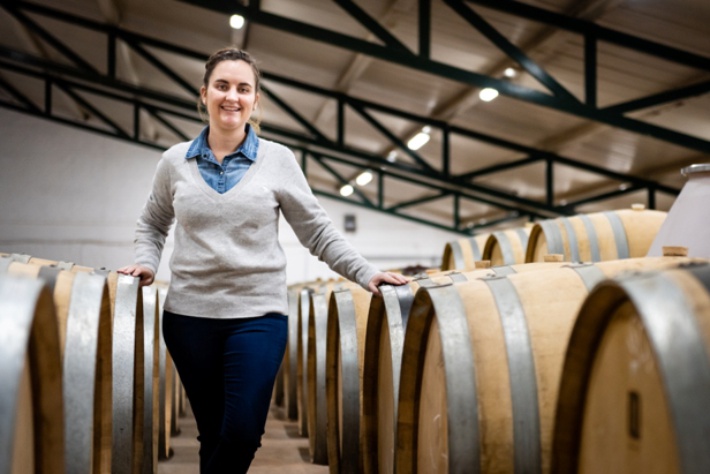 Renowned Stellenbosch winery, Eikendal, has embarked on a new era with the official appointment of Maryke Botha as its winemaker. Until recently, she served as assistant to cellar master Nico Grobler, who departs after an 11-year tenure to develop his own wine project.

Maryke hits the position with a bang too, crowning her ascension with a Gold medal for the Eikendal Rosé 2020 – the first wine she released as full winemaker. The accolade was awarded at the most recent Gilbert & Gaillard International Challenge.

“We appreciate Nico’s significant contribution to Eikendal and we wish him well on his next adventure,” says Chris Saager, whose Swiss family has owned Eikendal since 1981. As executive responsible for business control as well as sales and marketing overseas, he adds that the team is excited to see Maryke take on her new role. “We have been impressed by her personality and skills in the vineyards and cellar – a testimony to Nico’s excellent mentorship.”

Under Nico’s tutelage, her talent was quickly revealed, and she further honed her skills with harvest stints at Domaine Lorenzon in Burgundy and DuMOL Winery in Russian River Valley, California.

This year’s harvest was the first that Maryke shouldered as Eikendal’s winemaker. All 2020 white wines have been produced under her lead, while she also shared responsibility for Eikendal’s 2019 reds and from the preceding year, for the Eikendal Classique Bordeaux blend.

“I am extremely excited about the wine,” she says about the Eikendal Rosé 2020. “It has the most beautiful suggestion of colour, with an amazing flavour profile – a combination of red berries, candy floss and rosewater, with a gentle yet lively, crisp and refreshing acidity.”

The Merlot that takes up the lion’s share of the blend, hails from the highest vineyard on the estate. Its outstanding character is further crafted with touches of Grenache, Cinsault and Mourvèdre. It is a fine, first ambassador of Maryke’s skills and insights, but also as a proud new addition to the renowned Eikendal portfolio.

“Employing an approach synonymous with Swiss quality, Eikendal prides itself on being detail-orientated,” says Maryke. “Focus begins in the vineyard and is applied through precision viticulture. Every block of vineyard is cultivated in its own unique way to ensure the highest quality grapes are produced. Different trellising and training systems are sometimes implemented on a single variety to ensure the style of wine we want to produce can be obtained with minimum intervention in the cellar.

“We want to be able to taste the wine in the grape bunches and carry that so the terroir shines through in the glass.”

The Eikendal Rosé 2020 sells for R125 and is available from the winery and selected fine restaurants. It can also be ordered online, along with others from the portfolio, for delivery within South Africa, via the online store at shop.eikendal.com.

Eikendal is situated in what is known as the Golden Triangle of superlative wineries, off the R44 between Stellenbosch and Somerset West.