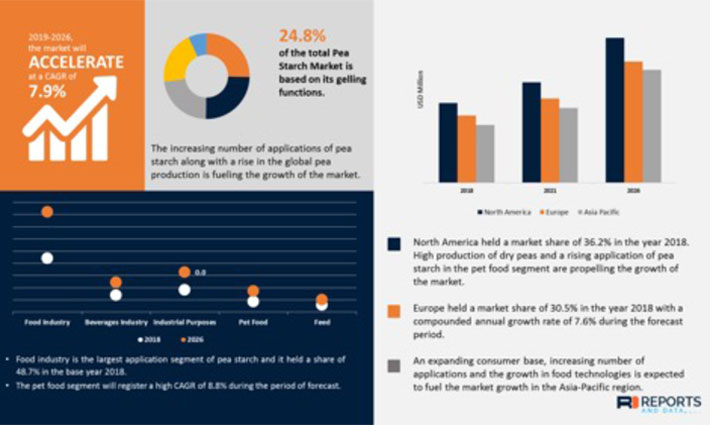 Pea starch has different processing properties from that of pea flour, however, it is also a resultant of yellow peas, and both are most common ingredients derived from pea. They are neutral in taste and color in a white powdered form and consists of approximately, 40% starch content however, the starch is non-GMO, non-allergenic/gluten-free ingredient.

Stability of pea starch in food offers long lasted crispness in food products including, improvement in volume for extruded snacks. It is widely used in pet food industry, due the natural properties that it offers such as gluten and lactose free solutions, low calorie formulations and allergen solutions among other solutions. It is observed that consumption of these ingredients in manufacturing of the processed food is about to bring health benefits for humans across the world. For example, in pasta manufacturing, pea starches increase the amount of resistant starch which has health benefits, such as improved colon health.

North America is the largest regional market globally and is expected to expand at a remarkable growth rate during the forecast period. The Asia Pacific region is anticipated to grow at the fastest rate during the forecast period among other regions, mainly due to large-scale production and the presence of a massive consumer base with a continuous demand for processed food & beverage products. However, fluctuation is witnessed in production supply leading to demand supply gap and rising raw material costs together with certain drawbacks such as lack of awareness regarding such ingredients and the inability to provide a smooth texture desired for food products restrain the market to certain extent. Nevertheless, investments, collaboration between current market players, new product launches and new market entrants are likely to foster the growth of global pea starch market across several regions during the forecast period.

Based on the grade, the segmentation is divided into food, feed and other industrial sectors. These sectors employs these ingredients for several processes, predominantly in snacks and savories segment. Without deteriorating the quality of feed and food products, pea starch helps to replace the traditional gluten free ingredients such as, potato starch, rice flour and tapioca starch. Pea starch and protein must be produced under hygienic process conditions, to be used in food industry.

The increasing volume of the global pea production, growth in the demand for canned and preserved foods, expanding application of pea starch in varied applications and a rising demand from the pet food industry along with other industrial operations are major driving factors of the market. The increased consumer demand for pea protein and pea fiber has ultimately resulted in a surplus of pea starch.

It was estimated that food segment among the other segments in the grade type outlook is projected to hold the largest share in the global market. This growth is attributed to wide consumer acceptability for healthy lifestyle, increasing in purchasing power and increased awareness and knowledge regarding health benefits attributed to the food products containing pea starch.

Pea starch is gradually becoming a popular food component due to its productive biological effects and heat resistance during its functioning. The processing method along with the properties of the starch determine the digestibility of the pea starch. The main function of the alteration of starch is to improve and expand its properties thus, increasing the potential application value.

Due to its beneficial functionality in several foods, dairy, cosmetics, pharmaceutical industrial products to name a few, pea starch has been promoted in recent years as a new functional nutritional ingredient in the development of original food products. Based on the function type outlook, the segmentation is determined into binding and thickening, gelling, texturizing and film foaming among others. According to the segmentation, it was noted that the gelling segment records the highest growth rate in the functions type outlook in the global market.

Gelling is one of the properties of pea starch which is applied to replace gelatin, casein, skim milk powder, emulsifying protein, xanthan gum or carrageenan. Thickening and binding segment accounts for the largest share in the functions outlook of the pea starch market. The large share is attributed to excellent quality of binding and thickening functionality along with significant amylose content of pea starch.

Pea protein holds capabilities and functionalities to serve various foods such as snacks & cereals, nutrition bars, soups, sauces, pasta, biscuits and meat replacements. It is also proving to be a rewarding element for gluten-free diets, vegetarian and vegan food diets, sports nutrition, slimming essentials and clinical nutrition among other applications. Pea protein has a high protein content and an outstanding digestibility.

One of the important sources of starch is pea and is grown in several wide-reaching regions as one of the oldest domesticated food crops. China is the second largest producer of peas in the world producing almost 1.6 million tonnes of peas followed by Russia. However, North America dominates the market with its significant market share due to higher purchasing power of people, improved health habits and innovative product launches by the key players in the market.

Lately, pea has industrialized into a major protein crop in Western Canada as well. With the help of air classification or wet milling techniques, small commercial industries in Canada have engaged in manufacturing protein concentrated from pea in order to search for new food protein resources. However, these processes produce major products related to be either crude or refined pea starches.

Companies considered and profiled in this market study

The players operating in the market have undertaken a number of strategies related to the market in the period 2017-2020. The key highlight is:

The Food Ingredients industry offers numerous growth opportunities due to growing awareness regarding health issues. Thus, a number of startups providing innovative products and technologies have been entering the market. Some of them include, Clara Foods, Beyond Meat, Exo, Hampton Creek, Energy Bits, Hooked, Mister Veg, Heuros, The Live Green Co, Wholyfood, Devon Garden and Modern Meadow among other start-ups.

Mergers and Acquisitions are an integral part of the Sensor Patch industry. Along with the companies operating in the market, other key market players have also been entering the industry.

According to the industrial expert’s analysis, demand for pea starch will increase during the forecast period. The growth in this market is also attributed to properties like paste clarity, solubility and thaw stability. Pea starch has conventionally helped with binding and disintegration purposes in the pharmaceuticals industry. Moreover, adoption of advanced technology, innovation in new products, collaborations and mergers between existing key market players along with new entrants is set to grow and develop the market especially in emerging nations. Experts also believe that increase in the adoption of improved food technology for research in emerging nations would be a key development area for the industry.

Segments Covered in the report

This report estimates revenue growth at a global, regional & country level, and provides an analysis of the market trends in each of the sub-segments from 2017 to 2027. The scope of the report can be defined as:

For the purpose of this study, Reports and Data have segmented the market on the basis of grade, function, application and region: