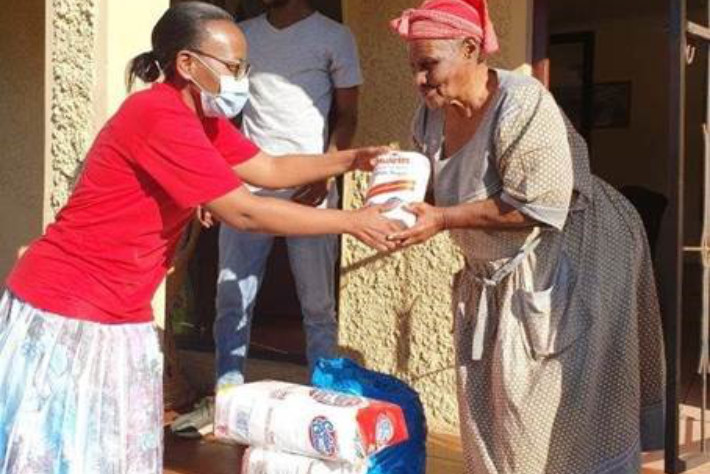 “We’ve worked for decades with the communities where we trade. We support one another, and we couldn’t turn a blind eye on what’s happening around us, so it was important to lend a hand during this pandemic. The Western Cape is currently the epicentre of the COVID-19 pandemic in SA and with Tongaat operating in the region, it was the right thing to do,” said Mamokete Mmatli, Tongaat Hulett Starch Logistics Manager.

Tongaat Hulett Sugar Corporate Affairs Executive Nkonzo Mhlongo said that according to Stats SA, one in four people in South Africa suffer from hunger on a regular basis, and more than half of the country’s population are at risk of going hungry every day.

“Child-headed households, the unemployed urban poor, the indigent rural households, and unemployed youth are particularly vulnerable. COVID-19 was a new dynamic in these already struggling communities and it has pushed households to breaking point”.

“Tongaat Hulett had to redouble its efforts.  An amount of R1,3 million was allocated to accelerate the purchasing of non-perishable food items for indigent households in KwaZulu-Natal (KZN), Gauteng and Cape Town. Each food hamper provides food security to a family for about two months,” said Mhlongo.

In addition, she said the company initiated a feeding scheme to support vulnerable people, particularly children. To date, the company has provided warm meals to approximately 12 000 people.  The company has also donated sugar to the value of R200 000 to non-governmental organisations in and around KZN.  These organisations are able to add more beneficiaries to their list because the cost of sugar is already covered by Tongaat.

In KZN, Tongaat has worked with local Councillors representing KwaDukuza municipality; eThekwini municipality and uMlalazi municipality, as well as with a number of traditional leadership structures under the King Cetshwayo district municipality. These include Ubizo; Mambuka; Madlebe; Dube; Mkhwanazi, kwesakwaMthethwa; Khoza; Sikhonyane and Macambini.

In Cape Town and Germiston, the company has worked in partnership with the Red Cross in identifying the socially vulnerable individuals and households at Ekurhuleni and within the City of Cape Town.

Mmatli said Tongaat’s products touched lives directly or indirectly in each community. “It made sense to collaborate with our other divisions and find a right partner with products that complement our brand.

“Everyone involved was really helpful in preparing the food hampers distributed to the NGOs identified by Red Cross, with whom we work in partnership,” said Mmatli.

Together with the local Councillor, Ward Committee members and the representatives from the Red Cross Society, Tongaat Hulett delivered food hampers to 400 households in Ward 2, KwaDukuza municipality.

Councillor Nhleko said: “Most of the families in this community struggle to make ends meet.  Putting a plate of food on the table is a daily battle for many heads of households. Tongaat Hulett’s support will lessen the burden for them, and the food hampers show the community that the company really cares. You gave us hope for a better future for ourselves and our children,” he said

To ensure that the initiative becomes a reality in all three provinces, Tongaat Hulett partnered with the Red Cross Society.  The Red Cross played a key role in identifying and verifying individuals who were experiencing undue hardship.

“We encourage partnerships between communities and the private sector, particularly during times of hardship. The Tongaat Hulett food hamper project targets individuals who are genuinely at breaking point.  The project is executed in a manner that also protects the dignity of the supported families,” said Siyabonga Hlatshwayo from the South African Red Cross Society in KZN.  “We will continue to advocate and represent the needs of the marginalised and vulnerable people in society.  We are proud to join hands with companies like Tongaat Hulett”.