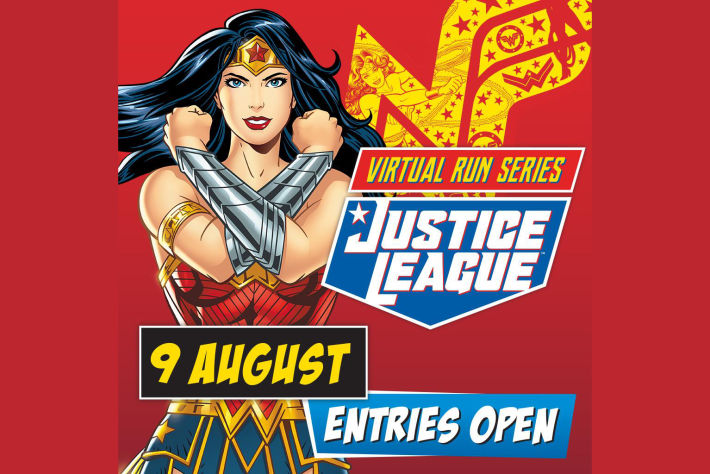 Women are Wonderful there is no doubt about that! Wonder Woman is blessed with unique powers and abilities; Beauty, Strength, Wisdom, Speed just like our women of South Africa. Be part of the Wonder Woman Run where thousands of active people take to the streets wearing their Justice League™ Wonder Woman T shirts, walking and running in celebration of Women’s Day!

Enter The J ustice League ™ Virtual Run Series. Join your fellow runners (or walkers, crawlers and cyclists) and experience the heroics of completing a 2.5km, 5km, 7.5km or 10km run/walk in your very own neighbourhood.

Here is an opportunity to fight for those who cannot fight for themselves the many underprivileged young children who certainly need a helping hand in these trying times! The
best of all is you will be doing what you enjoy most and receive a T-sh irt and medal for your effort! Be a hero and run or walk for a worthy cause.

On the 19 th of July we will s ee Superman everywhere running in every small town and every big city in the country. But now it’ s time for Wonder Woman to join The Justice League™ Virtual Run  Series and make her debut.

Participation in these Virtual Runs/Walks ensure s contributions to beneficiaries such as Headstart Kids [who provide specialised, nutritional food packs to children aged 6 months to 5 years]. Relief will be given to people in need. The more entries, the more Food Packs and meals our beneficiaries can distribute.

The Justice League ™ Virtual Run Series is the official series of Warner Bros. Consumer Products in South Africa. The events are produced by Sportsvendo, the same company who brought the unprecedented success of The Color Run to South Africa.

You will be able to partake in 5 Virtual Runs. You will leave from your residence, on the same day at the same time at 8am as Superman for the Superman Run then the following months Wonder Woman Run, Aquaman Run, Batman Run, and then The Flash Run running, walking, jogging, cycling, pushin prams or even crawling all in aid of our beneficiaries to help the people of South Africa who need it most, our children.
The 2020 Justice League™ Virtual Run Series takes place on the following dates:

Follow our Celebrity Super Heroes, Letshego Zulu, Nicole Capper, Kagiso Sebediela LeAnne Dlamini Paul Rothman, Coach Simon Heidi M (resident greatness coach) and Patron Ilzé Saunders They will make sure our eyes are bright with anticipation, and our brows have the lightest trickle of sweat as they take South Africa through some crazy fun warm up routines before the Wonder Woman Run, and we all sing and dance along even while apart.

After these Virtual Runs /Walks all South Africa ns will get the opportunity to participate in the actual venue based mass group” events that will take place in the major South African cities.

What good is doing good without a few goodies? Entry* into T he Justice League ™ Virtual Run Series gets you equipped with the following essential armour:

For more information on being part of the very first DC Super Hero Virtual Run Series, visit us on our website and social media platforms or drop us an email at hello@WonderWomanRun.co.za